N/uu is the most endangered, still spoken language of Southern Africa. N/uu was thought to be extinct among expert linguists, but in the late 1990s, about 20 elderly speakers from the ǂKhomani community revealed their competence in this language. As of December 2021, only one N/uu speaker remains: Katrina Esau.
​​
N/uu is the last surviving member of the !Ui branch of the Tuu language family, with all other members of this branch - /Xam, ǂUngkue and //Xegwi - being extinct. Speakers of !Ui languages were the first people of today's Southern Africa. They lived as hunter-gatherers before being forced into assimilation by intruding white settlers and their Nama- or Afrikaans-speaking clients. Until today, the members of the ǂKhomani community remain to be among the most marginalised and disadvantaged people of South Africa.

For a general overview on the past and present of the N/uu language and its speakers, click here.
N/uu, the last !Ui language
​N/uu is the last surviving !Ui language and as such a close sister language of /Xam. Although /Xam became extinct some 100 years ago, it is nevertheless the most visible language of autochthonous hunter-gatherers of South Africa. /Xam was chosen in the motto !ke e: /xarra ke ('diverse people unite') of the new South Africa and as such features prominently on all South African notes and coins, on all official governmental documents, etc. The digital Bleek and Lloyd archive makes thousands of pages of text in /Xam, as recorded by Lucy Lloyd and Wilhelm Bleek in the 1870s, publicly accessible.
N/uu language teaching efforts
​Katrina Esau can be considered to be a language champion, who plays an outstanding in the language revitalisation efforts of the ǂKhomani community. She has been actively teaching N/uu for over two decades. She is assisted by her granddaughter, Claudia du Plessis. Katrina is non-literate and Claudia is one of the few community members who can read and write N/uu. Since 2016, David van Wyk also assists Katrina and manages the N/uu language school, Staar na die Sterre.

Approximately 25-40 children from the neighbourhood are taught N/uu words, phrases and songs three times a week for two hours per day. 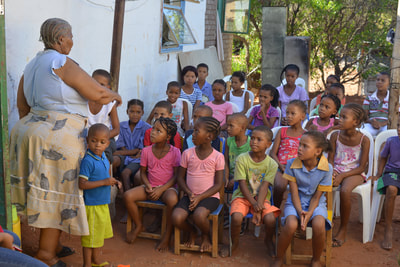 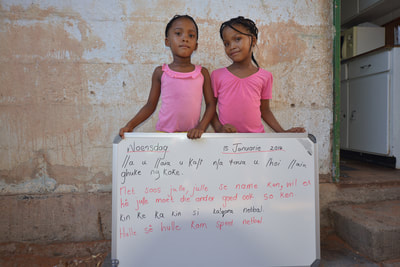 ​In 2013, when ​​I joined the Centre for African Language Diversity (CALDi) at the University of Cape Town, I took over the N/uu language project. Together with Matthias Brenzinger, the then Director of CALDi, we worked with the community for the following three years. In consultation with the community members, we discussed the N/uu orthography, the development of alphabet charts and language posters, as well as the production of a N/uu reader. 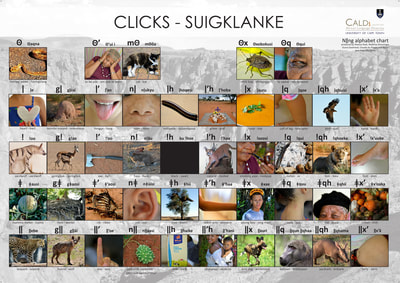 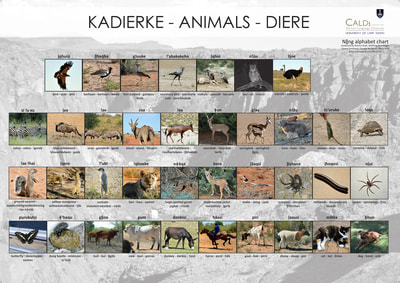 We designed N/uu alphabet charts and language posters using the N/uu practical orthography. Language posters include an illustrated N/uu animal poster with translations in English, Afrikaans and ǂKhomani Nama, as several members of the community speak Nama. ​​Since March 2014, the alphabet charts and language posters are being used in teaching efforts.
​Development of the N/uu reader
​The main outcome of this project is a 160-page trilingual N/uu-Afrikaans-English reader entitled ﻿Ouma Geelmeid ke k'xu //xa//xa N/uu﻿. The title including the name were suggested by Katrina and refer to her past. As a young woman, she was called "Geelmeid" by her Afrikaans employer, meid meaning 'maid' and geel meaning 'yellow' in Afrikaans, both being offensive terms. Nevertheless, Katrina and others used the name "Ouma Geelmeid", ouma meaning 'grandma', at the time the reader was produced.

Katrina's school received 300 free copies of the printed version and the reader is also freely accessible on OpenUCT. In 2017, the N/uu reader received the annual award from the ATKV (Afrikaanse Taal- en Kultuurvereniging), the Afrikaans language and cultural association, in the category of dictionaries.

The N/uu reader comprises twelve thematic areas with phrases and sentences derived from everyday conversations, as well as games, prayers and songs. Core cultural terms and basic vocabulary used by Ouma Geelmeid were added in N/uu-Afrikaans-English and Afrikaans-N/uu-English glossaries. ​ 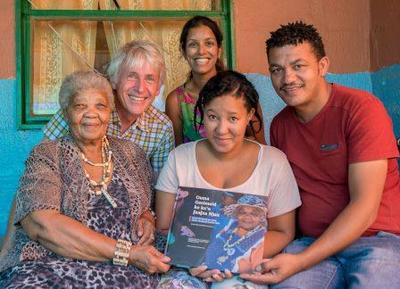 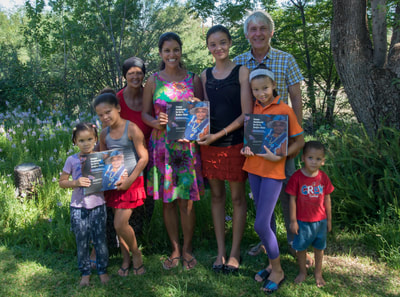 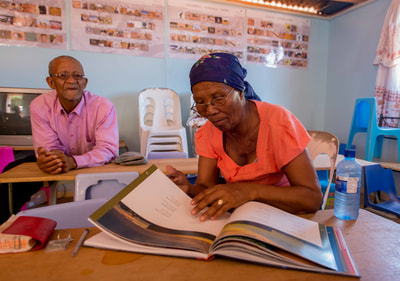 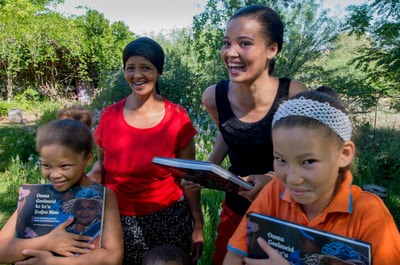 Comments on the N/uu reader by linguists
​
​"With 114 distinct speech sounds, N/uu is one of the great masterpieces of the human genius to create language, and its sumptuous ensemble of clicks are iconic of Southern Africa. Now just three old sisters still speak it fluently, leaving them to wonder: what is our land without its language? This book is a brave step towards restoring an ancient and noble vehicle for the soul of the Kalahari, and ingeniously solves the problem of writing so many sounds with so few letters, providing translations of the N/uu material into both English and Afrikaans. I congratulate Ouma Geelmeid (Katrina Esau), Sheena Shah, Matthias Brenzinger, Claudia du Plessis, Mary-Ann Prins and CALDi on producing this book and hope that many people will use it to learn about, and learn, this magnificent language, so that more people in the future can truly say "Na ǂxoa N/uu" 'I speak N/uu / Ek praat N/uu'."
Nicholas Evans, ​Professor and Director, Australian Research Centre of Excellence for the Dynamics of Language, Canberra, Australia

"Preserving the cultural heritage of a nation is a task where linguists can play an important role. The present reader is the result of a commendable project where language experts in cooperation with the speaker community were not only able to document relics of South Africa’s precious linguistic prehistory but also to make the documented resources available to the public, making it possible that the nearly extinct N/uu language be preserved and put to new uses. I am satisfied that this reader will serve as a model for other endangered language projects in Africa and beyond."
Bernd Heine, ​Emeritus Professor, FBA MAE, University of Cologne, Germany

"The world extends from A to Z, especially the world of languages. Or that is what alphabetocentric Europeans think. And then N/uu, a South African language with an inventory of 114 distinct speech sounds, including a number of rare sounds unknown in most other languages. The 26 letters of the Latin alphabet clearly cannot capture the relevant distinctions. Based on previous linguistic studies of the language and in close collaboration with community members, Sheena Shah and Matthias Brenzinger created a written form for N/uu which is elegant and easy to understand, supplementing the Latin alphabet with diacritical marks and additional letters. Presenting written N/uu vividly and attractively, this reader plays a vital role in the revitalisation efforts of the few remaining speakers and engaged community members and in the documentation and preservation of a language that is a most interesting testimony to the creativity of the human mind."
Florian Coulmas, Senior Professor for Japanese Society and Sociolinguistics, Universität Duisburg-Essen, Germany

Documentary film on N/uu
​​The award-winning documentary ​Lost Tongue (2016), directed and written by Davison Mudzingwa, features Matthias Brenzinger, Katrina Esau, Paul John Myburgh, Andries Steenkamp and Helena Steenkamp. The story is told from the perspective of Helena Steenkamp, a ǂKhomani woman from the Kalahari, who reflects on the loss of her ancestral language. Matthias is one of the six main casts and provides linguistic background and context.
The first children's book authored by Katrina and Claudia
​In this children's book, !Qhoi n/a Tjhoi / Skilpad en Volstruis / Tortoise and Ostrich, Katrina tells the folktale of the ostrich and tortoise which is published in N/uu, with Afrikaans and English translations. The book authored by Katrina and Claudia was published by Puku Children’s Literature Foundation in 2021. We were happy to support this exciting initiative as "N/uu editors". Here are 9 reasons you should get a copy of this book!
International and national media coverage
Our work with Katrina Esau and her community has been featured in: 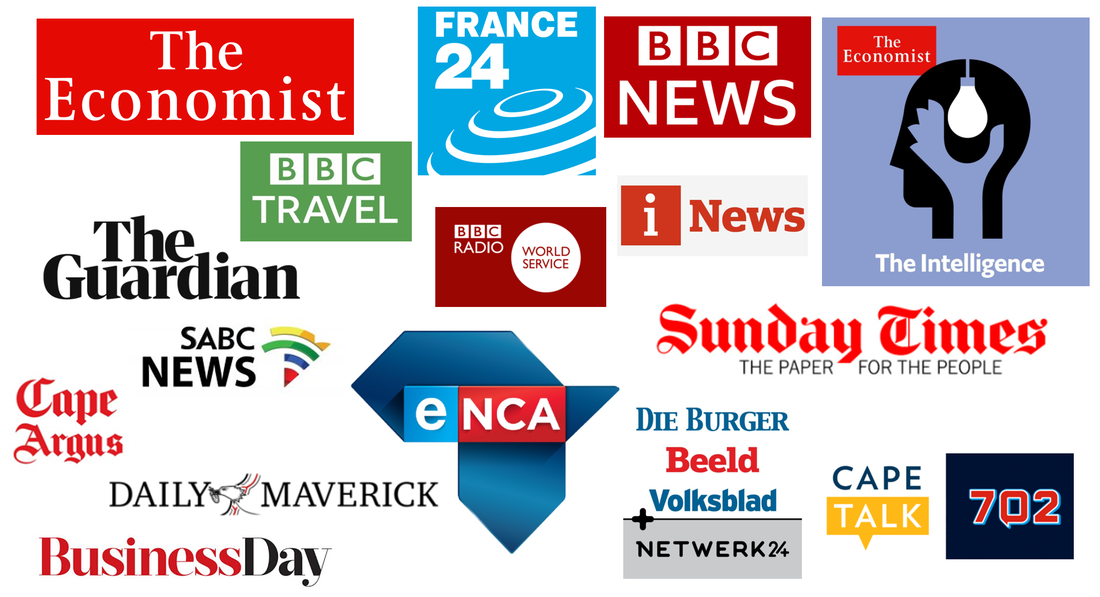